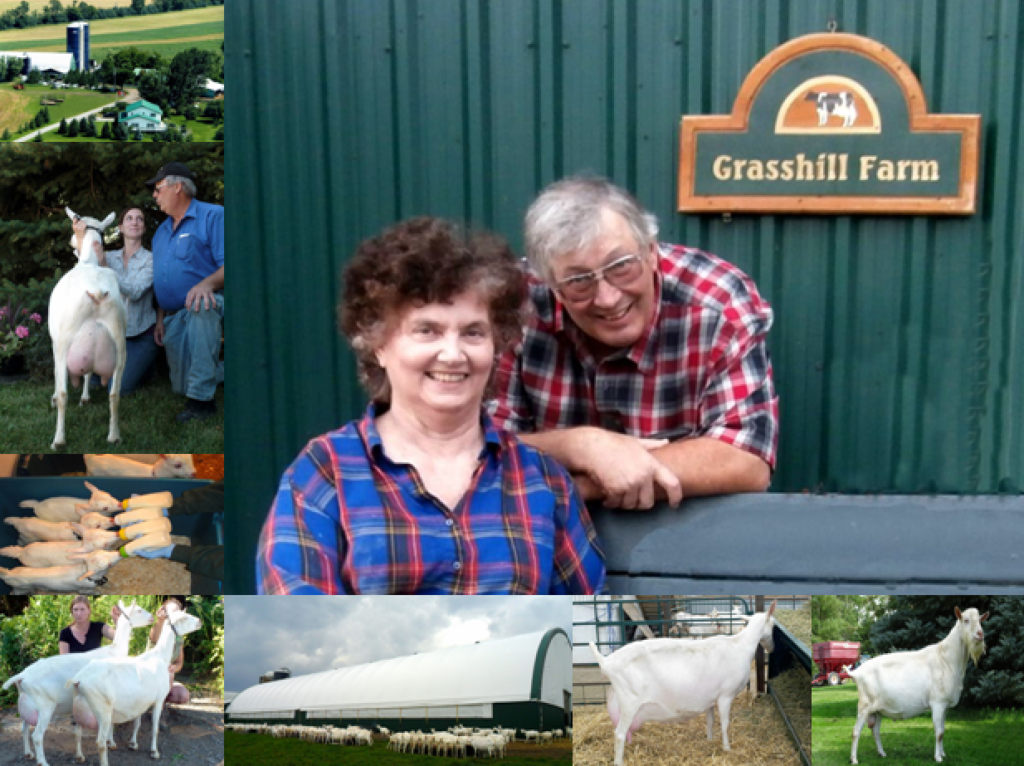 No compromise in quality, only the best is good enough!

To summarize Grasshill Farm from Ontario, in a nutshell: This is a typical family business with 305 day milk records up to 3688 kg and lifetime production up to 20,114 kg, which places this herd near the absolute top of the global dairy goat farming sector.

Grasshill Farm has been breeding purebred Saanen goats for over 20 years and is one of the very best Saanen breeders in the world. Grasshill Farm is run by Lloyd and Barbara Wicks and their children Shawna, Holly, Emily and Matthew.

Emphasis is also placed on DNA testing to selectively breed for animals carrying the genes for high casein (Casein A) and Scrapie Resistance.

LIoyd Wicks about his breeding performance:

“We believe that high lifetime production is the best proof of true sustainability, efficiency and profitability at farm level. Our animals have proven worldwide that they can handle high production for many years, under different conditions.”

Goats in the spotlight

Indicating how well this family”s traits are transmitted, Grasshill Tara”s daughter, “Tiara” EX 90 is following in her dam”s tracks with a lifetime production of 14,440 kg. Other descendants are continuing this family tradition, with impressive conformation and production results not only in the offspring born at Grasshill, but also in the AI offspring born in other countries sired by semen from Tara”s sons. Especially of note in these offspring is not only the top production, but also the excellent udder conformation. a trait quite characteristic throughout the Shnooks family whose genetic ties extend to “Sonny” and “Designator” .

Grasshill Champ”s Diana VG-88: the daughter of Champ EX, a buck from one of our most consistent high lifetime production, good-uddered families, “Diana” is a goat excelling in body capacity who has achieved one of the highest 305 day production results in the world for an individual 305 day lactation (3688 kg, 305 days, 12.1 kg /day) with lifetime production to date: 18,030 kg. Carrying on these traits, the direct daughters of Grasshill Diana are also consistent high producers, with 305 day lactation production amounts up to 2280 kg. The tremendous body capacity and dairy strength that allowed Diana to achieve such incrediby high production is a trait she is definitely passing on. It is already obvious in her grandson “Designator“.

Grasshill Nadia EX 92: a goat excelling in production persistency, Nadia is one of the highest total production goats in the world with a lifetime production of 20,114 kg. Nadia has kidded 8X, milked 3533 days, and been dry only 187 days since her first kidding in 2006. Family members also exhibit this milk persistency trait. An example is her daughter “Grasshill New Day” EX-92, with 11,740 kg (4.0% fat 3.1% protein) already produced in her first 3 lactations. During that time “New Day” has milked 2699 days straight through averaging 4.3 kg/day with no dry period between, while at the same time giving birth 3 times to 6 kids. To identify the gene responsible for the persistency trait so evident in this family will obviously require more DNA research. We certainly expect though that this persistency (& high total production) trait is one which “New Day” will have transmitted to her son. He is “Grasshill New Dawn“. one of the Grasshill bucks whose semen is now available. Adding to their genetic potential, two of the other Grasshill bucks now available, “Sonny” and “Designator“, also include some Nadia bloodlines in their pedigrees.

In addition to top production and great conformation, Grasshill’s bucks have also been tested for the gene for scrapie resistance and the gene for high casein. The “High Casein DNA” is strongly correlated with a high protein content in the milk.

We use cookies on our website to give you the most relevant experience by remembering your preferences and repeat visits. By clicking “Accept All”, you consent to the use of ALL the cookies. However, you may visit "Cookie Settings" to provide a controlled consent.
Cookie SettingsAccept All
Manage consent

This website uses cookies to improve your experience as you navigate the website. Out of these, the cookies that are categorized as necessary are stored on your browser as they are essential for the basic functionalities of the website to work. We also use third-party cookies that help us analyze and understand how you use this website. These cookies are only stored in your browser with your consent. You also have the option to opt out of these cookies. However, opting out of some of these cookies may affect your browsing experience.
Performance
Performance cookies are used to understand and analyze the key performance indexes of the website which helps in delivering a better user experience for the visitors.
Analytic
Analytical cookies are used to understand how visitors interact with the website. These cookies help provide information about statistics, number of visitors, bounce rate, traffic source, etc.
Others
Other uncategorized cookies are those that are being analyzed and have not been classified into a category as yet.
Necessary
Necessary cookies are absolutely essential for the website to function properly. These cookies ensure basic functionalities and security features of the website, anonymously.
Advertisement
Advertisement cookies are used to provide visitors with relevant ads and marketing campaigns. These cookies track visitors across websites and collect information to provide customized ads.
Functional
Functional cookies help to perform certain functionalities like sharing the content of the website on social media platforms, collect feedbacks, and other third-party features.
SAVE & ACCEPT