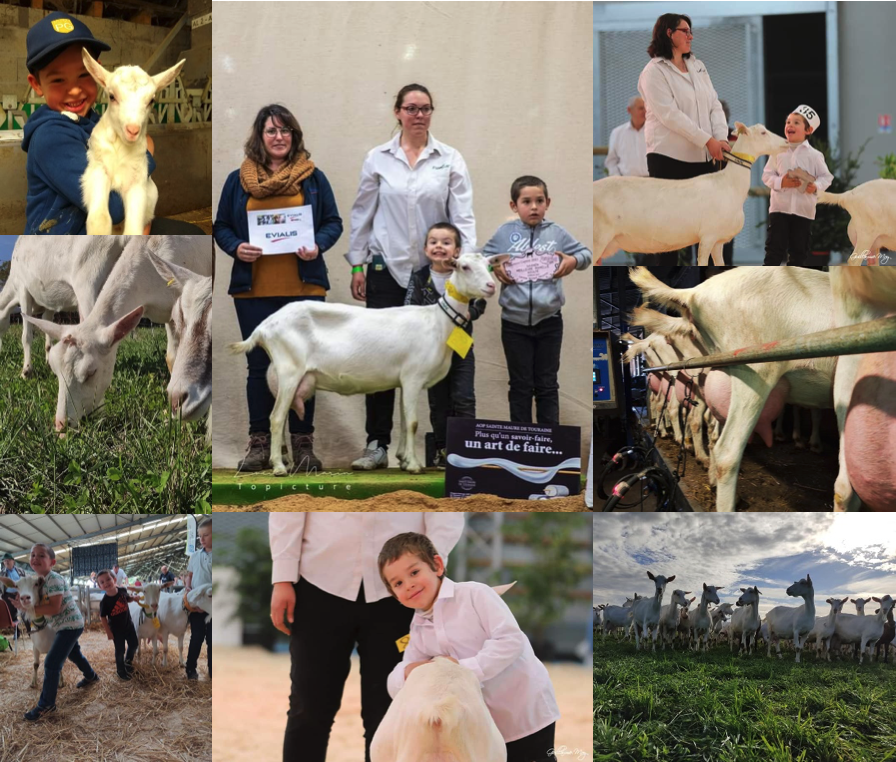 In Vandon, France, Aimie Damonte Pierrick Chagneau has lived with her husband and two sons Lorenzo and Marius since 2016 on their farm with 500 milking goats and 60 dairy cows. Focusing on super udders and a high milk production from mainly grass, that’s how you can describe their breeding goal. Participating in shows is Aime’s great passion. She already has an impressive list of show successes to her name. Not only Aimie is very fanatical with the shows, but also her two sons Lorenzo and Marius seem completely gripped by the show virus. A fantastic future with great show successes is thus assured.

The ration for the milking goats mainly consists of grass that comes from own land. In the summer the goats have the opportunity to go outside to graze and in the winter they mainly feed silage. By growing the grass on their own land, the family can keep the quality in their own hands.

In addition, because of the many walks to graze, the selection for strong legs is strict and only goats with above-average good legs are used for breeding.

The goats currently impressing in Vandon are 81394 “Olympia” (produce this year 1304kg in 250days) and 91062. Both goats achieved multiple high rankings at various shows in recent years and are a great example of Aimie’s breeding goal.

All goats that have faultless conformation, good udders, strong legs and are able to achieve a high milk production mainly from grass.

“My passion is going to shows with my goats. Fault less conformation is therefore important within my breeding goal to have good goats to do grazzing . However, we also want to have goats for producing milk. Being able to process a lot of roughage to achieve a high milkproduction is economically important for our farm.”

Goats in the spotlight 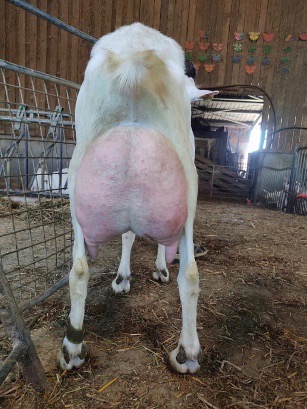 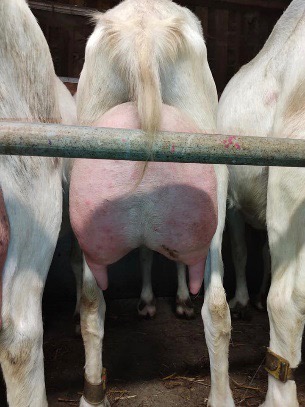 We use cookies on our website to give you the most relevant experience by remembering your preferences and repeat visits. By clicking “Accept All”, you consent to the use of ALL the cookies. However, you may visit "Cookie Settings" to provide a controlled consent.
Cookie SettingsAccept All
Manage consent

This website uses cookies to improve your experience as you navigate the website. Out of these, the cookies that are categorized as necessary are stored on your browser as they are essential for the basic functionalities of the website to work. We also use third-party cookies that help us analyze and understand how you use this website. These cookies are only stored in your browser with your consent. You also have the option to opt out of these cookies. However, opting out of some of these cookies may affect your browsing experience.
Performance
Performance cookies are used to understand and analyze the key performance indexes of the website which helps in delivering a better user experience for the visitors.
Analytic
Analytical cookies are used to understand how visitors interact with the website. These cookies help provide information about statistics, number of visitors, bounce rate, traffic source, etc.
Others
Other uncategorized cookies are those that are being analyzed and have not been classified into a category as yet.
Necessary
Necessary cookies are absolutely essential for the website to function properly. These cookies ensure basic functionalities and security features of the website, anonymously.
Advertisement
Advertisement cookies are used to provide visitors with relevant ads and marketing campaigns. These cookies track visitors across websites and collect information to provide customized ads.
Functional
Functional cookies help to perform certain functionalities like sharing the content of the website on social media platforms, collect feedbacks, and other third-party features.
SAVE & ACCEPT